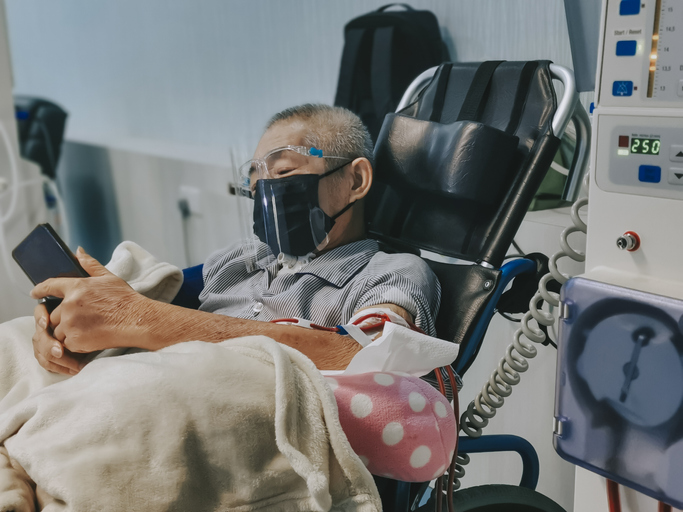 On 15% of adults in the United States (US) have chronic kidney disease (CKD) and 1 of 3 American adults are at risk for CRF. Almost 560,000 American adults are on dialysis. Minorities are disproportionately affected by CRF and end-stage renal disease (ESRD); compared to white Americans, black Americans are Four times more likely to develop kidney failure and Hispanic Americans are 1.3 times more likely to require dialysis.

Current phosphorus management strategies are insufficient to achieve and maintain phosphate levels 5.5 mg / dL (or more normal levels) for the majority of patients. Phosphate binders have an inefficient mechanism of action that potentially explains the continuing clinical challenge of consistently achieving and maintaining target serum phosphorus concentrations. Instead of acting directly on routes of absorption of phosphatesWhether it is the secondary transcellular pathway or the primary paracellular pathway, phosphate binders â€œtrapâ€ dietary phosphate particles in the gastrointestinal (GI) tract. To “trap” and bind phosphorus before it is absorbed, the binders must be in the gut along with the dietary phosphorus. Thus, most patients are advised to take phosphate binders. at every meal and snack, which results in a high dosing frequency. In addition, in vivo, each pill can only bind one discrete amount phosphorus. So, patients generally need many large pills each time they eat in order to bind a significant amount of dietary phosphate. Studies have shown that, on average, patients on dialysis are prescribed 10.8 phosphate binder tablets / day, which is approximately 50% of their total daily pill load.

Additionally, as a class, phosphate binders have been associated with clinically significant effects GI tolerance problems, including abdominal pain, constipation, diarrhea, nausea and vomiting. In clinical trials with phosphate binders, between 14% and 27% of patients discontinued treatment due to side effects, with Gastrointestinal events being the most common reason. In addition, rarely, severe cases of gastrointestinal obstruction, some requiring surgery or hospitalization, have been identified in post-marketing reports of patients taking lanthanum carbonate. Calcium-based phosphate binders can lead to calcium load and contribute to vascular calcification, potentially exacerbating negative clinical outcomes. These factors likely contribute to the inability of the majority of dialysis patients to achieve and maintain serum phosphorus concentrations of around 5.5 mg / dL, indicating an opportunity for therapeutic innovations.

Why new treatments are desperately needed

Systemic homeostasis of phosphates is maintained primarily by urinary excretion. As chronic kidney disease (CKD) progresses, kidney function declines, resulting in phosphate retention. High levels of serum phosphorus, or hyperphosphatemia, are seen in most patients with advanced CRF and those on dialysis. The goal of treatment for hyperphosphatemia should be to reduce serum phosphorus to 5.5 mg / dL (or closer to normal levels) and to mitigate negative clinical outcomes for patients with CRF, including CV associated mortality, and reduce the negative impact on patient quality of life (QoL).

High phosphate levels are associated with an increased risk of CV events. Phosphate retention is also the trigger for the increase in fibroblast growth factor 23 and parathyroid hormone levels, both of which have been suggested to have direct pathogenic CV effects. High levels of FGF23 favor the left ventricular hypertrophy and congestive heart failure. High levels of PTH are associated with pro-inflammatory effect, increased interleukin 6, impaired myocardial energy production, and cardiac fibrosis. Thus, better management of phosphates would be a logical approach to potentially improve CV health.

Current phosphate management options, including dietary restrictions and phosphate binders, decrease the overall quality of life for dialysis patients. The difficulty of maintaining a low phosphate diet is exacerbated by the large amounts of “hidden” phosphate additives in modern processed foods (p. On labels.

Consuming a separate diet can also create social, physical and temporal distancing between patients and their family members. Patients may not be able to participate in social activities, which can lead to feelings of isolation at home and / or with friends. Phosphate binders are difficult to integrate into the daily life of patients and can have a negative impact and / or limit social interactions. Strict food restrictions limit food choices and increase stress and anxiety. Multiple phosphate binder pills should be taken with every meal and snack. If patients don’t have phosphate binders with them, they can’t eat anything. As a result, patients may feel stressed or overwhelmed by always having to carry phosphate binders or not being able to have impromptu meals / snacks. New, more effective phosphate management options can reduce the negative impact of dietary restrictions and binders on patient quality of life.

Absorption of dietary phosphate occurs in the gastrointestinal (GI) tract via 2 separate routes: paracellular absorption and transcellular transport. The paracellular pathway is not limited by a saturation point and has been found to be responsible for the vast majority of intestinal phosphate absorption, especially when luminal phosphate concentrations are high. The transcellular route is responsible for the absorption of phosphate in the presence of small amounts of dietary phosphate, but this route saturated at low concentrations of luminal phosphate. The available evidence indicates that the paracellular pathway is the primary mechanism of phosphate uptake under typical conditions of phosphate availability in individuals consuming standard Western diets.

Recently, Ardelyx announced that the FDA has released a full response letter for tenapanor, a drug with a novel mechanism of action intended to add to our options for managing hyperphosphatemia in the ESRD population. Given the suboptimal results of existing therapies, there is a substantial unmet need that additional treatment options could potentially meet. Beyond the general clinical health reasons why additional treatment options such as tenapanor are needed, any decision about kidney medication has a disproportionate impact on a growing and particularly underserved minority population. Common conditions like arterial hypertension, Diabetes, and cardiovascular illnesses are over-represented in minority populations and are factors predisposing to CRF and possible ESRD. Lower socio-economic groups are also strongly represented in the IRT population, with ~ 10x more prevalence in the population with the lowest socioeconomic status compared to that with the highest.