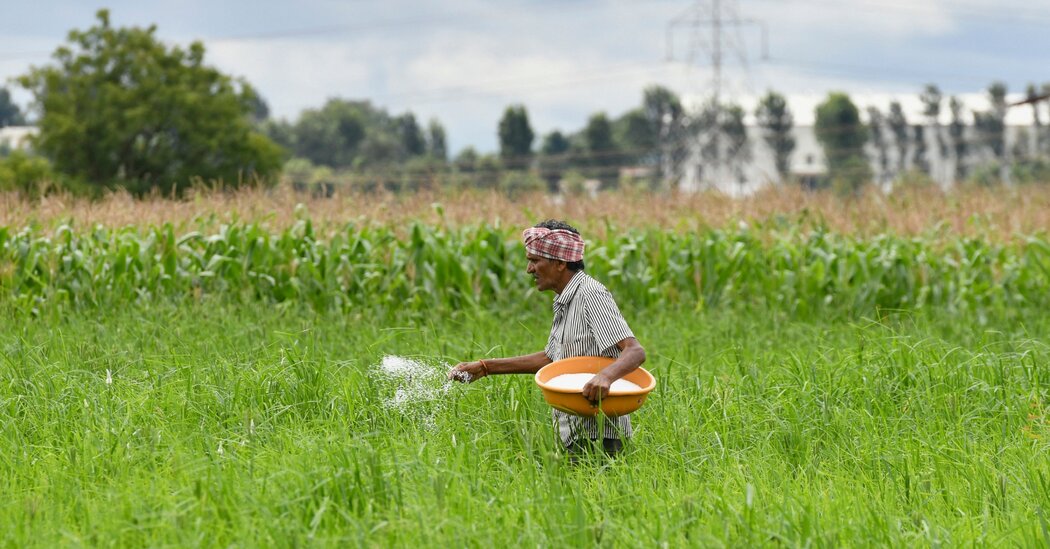 It’s the story of one of those little-known forces that quietly make the world work. It’s a story about the mechanical interconnection of modern civilization, about how disturbances in one part of the planet can trigger storms in another.

It’s a story, of course, about urea.

The prices of the humble chemical – yes, the stuff in the urine – are soaring at levels not seen in over a decade. In this time of shortages and inflationary worries, that might not seem too surprising. But urea connects several disparate strands of the global economic disruption, showing just how easily extreme weather and sea turbulence can cause supply shortages.

People and industries of all kinds are feeling the shocks. In India, the lack of urea has made farmers fear for their livelihoods. In South Korea, that meant truck drivers couldn’t start their engines.

Urea is an important type of agricultural fertilizer, so higher prices could ultimately mean higher costs at the table around the world. Food and Agriculture Organization of the United Nations food price index is already at its highest level since 2011. The coronavirus pandemic has caused large numbers of people to go hungry, and rising food prices could make it even more difficult to meet basic food needs. The prices of two other widely used plant foods are also skyrocketing.

A big reason for soaring fertilizer prices soaring the prices of coal and natural gas. Urea in your urine is produced in the liver. The industrial type is made through a century-old process that transforms natural gas or gas derived from coal into ammonia, which is then used to synthesize urea.

But a frightening confluence of other factors is also pushing up prices.

China and Russia, two of the biggest producers, have restricted their exports to ensure supplies for their own farmers. In the case of China, an energy crisis has led some regions to ration electricity, which forced fertilizer plants To slash production.

Hurricane Ida pushed several large chemical factories to suspend operations when it crossed the Gulf Coast of the United States in August. Western sanctions against Belarus have hit that country’s potash production, the key ingredient in another fertilizer. Port delays and high transport costs – plant foods are bulky products – have increased costs.

All of this reverberates around the world in unexpected and sometimes painful ways.

In India, fertilizer shortage fears have led crowds of desperate farmers congregate outside government distribution centers and clash with the police.

Truckers in South Korea fear they will not be able to work. The reason? Urea enters an industrial elixir that reduces greenhouse gas emissions from trucks and which South Korea does not allow diesel engines to start.

the British have fretted about running out of tiny bubbles in their carbonated drinks. Why? A large fertilizer maker, CF Industries, shut down operations at two factories in England in September, citing high natural gas prices. And food grade carbon dioxide is a byproduct of the ammonia production process. One of the two factories has since restarted production.

As to the big question of whether food prices are about to rise globally, John Baffes, a World Bank economist who studies commodity markets, said he believed that farmers had already largely frozen fertilizer prices for the current crop year.

But a different picture could emerge early next year, when the US Department of Agriculture publish the first results of its annual survey of US farmers’ planting intentions. These will give clues as to how producers around the world are reacting to the latest market conditions.

Not this time, he said.

â€œIf we see the prices of coal and natural gas staying at the levels we are seeing now, then we are definitely going to see food prices rise,â€ he said. â€œThere is no doubt about it. “

China is a mainstay of the global fertilizer trade. The country accounts for about one-tenth of global exports of urea-based fertilizers and one-third of exports of diammonium phosphate, another type of crop nutrient, according to the world Bank.

As fuel and fertilizer prices have started to rise this year, Chinese cabinet authorized in June billions of dollars in subsidies and other aid to farmers. The following month, the country’s main fertilizer producers met with the national planning agency and agreed to stop exports.

In the fall, soaring demand for electricity drove southwest Yunnan Province, a major phosphate producer, to order drastic production cuts by energy-intensive industries, including fertilizers. And in October, the Chinese customs authorities additional inspection requirements imposed on exports of 29 fertilizers and related products.

Chinese leaders have been paying much more attention to food security since the start of the pandemic, said Darin Friedrichs of Sitonie Consulting, a consulting firm in Shanghai that focuses on Chinese agricultural markets.

“They were probably ahead in realizing how much this was going to disrupt global supply chains,” Friedrichs said. “And in a situation like that, it’s obviously better to err on the side of trying to have more food rather than less.”

Understanding the rise in gas prices in the United States

Additional factors at play. The price of crude oil is only one component of rising gas prices. Meeting renewable fuel standards can contribute to the cost, the price of ethanol has increased, and labor shortages in the trucking industry have made it more expensive to deliver gasoline.

A global energy crisis. Other types of fuels, including natural gas and coal, are also increasingly expensive. Natural gas prices have climbed more than 150% in recent months, threatening to increase the prices of food, chemicals, plastics and heating this winter.

South Korea relies heavily on Chinese urea for industrial fluid which breaks down harmful gases in diesel exhaust. Under the country’s environmental regulations, electronic control systems in diesel trucks prevent the engine from running when the urea tank is empty.

As prices for the urea solution have increased tenfold over the past month, some South Korean truck drivers said they have lost jobs that will consume more urea, such as those involving long distances or large hills. On a construction site, if a single heavy truck runs out of urea, the whole project can be brought to a halt.

â€œIf my truck stops, my family’s livelihood, my children’s school fees, everything stops,â€ said Kim Jung-suk, 47, who drives a dump truck in Seoul.

Kim Woo-hyun, 50 – another driver and no parent – said he spent evenings and weekends testing for urea.

“I would call a bunch of gas stations until one of them told me there was some left and I would make an appointment with them to pick it up,” Kim said. â€œThen I would introduce myself and it would be gone. “

South Korea has airlifted thousands of gallons of urea from Australia before make a deal with China to allow the import of a few months of supply.

More than half of China’s urea exports this year went to India. The Indian government subsidizes fertilizers to keep prices low, but their distribution to producers requires coordination between national and state authorities who are often at odds for partisan and other reasons.

When the fertilizer crisis hit this fall, Danpal Yadav, 44, a rice farmer in central Madhya Pradesh state, was already in debt due to low crop yields last season. After returning home empty-handed after visiting government fertilizer distribution centers, he became distressed and spoke of suicide, his family said.

Time was running out for Mr. Yadav to feed his fields. On October 28, after sleeping outside a fertilizer center for three days and receiving nothing, he returned home and locked the door.

His brother Vivek later found him unconscious. He had consumed poison. Doctors pronounced him dead in a hospital.

â€œHe was desperately trying to find fertilizer,â€ said Vivek Yadav. “This is the story of every farmer during this season.”

If you are having thoughts of suicide, call the National Suicide Prevention Lifeline at 1-800-273-8255 (TALK). In India, call 1800-599-0019. You can find a list of additional resources at SpeakingOfSuicide.com/ressources.