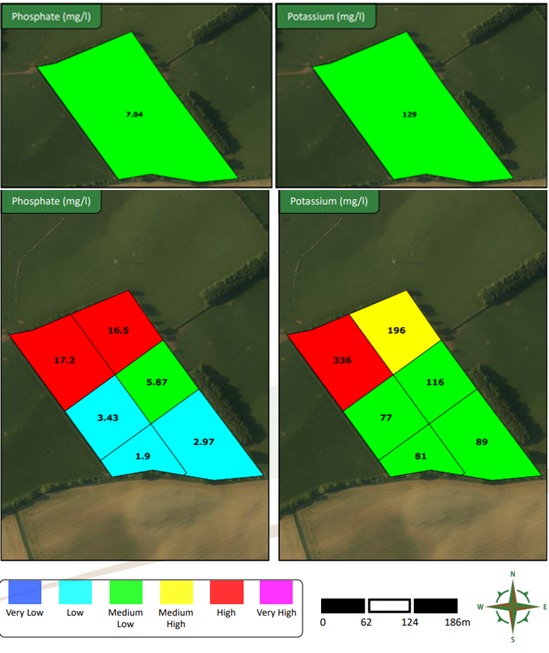 Soil health is more than just pH, phosphate and potash

According to a recent study by Farm Stock (Scotland), optimizing soil production requires more than lime, phosphate and potash.

The knowledge transfer project discovered that, regardless of their chemical profile, soils should be physically well-structured, free of compaction and biologically full of life. Studying 40 different fields across Scotland last winter, the project found that careful management of livestock, especially cattle, is as important as planning the use of machinery, to minimize compaction .

Of the 40 sites, acidity was not as low as expected, but of all the major nutrients, phosphate (P) was the most below recommended levels. Potash (K) levels were generally within target, but when lower, target silage crops were particularly likely to produce less.

One of the key findings was that soil testing at field level can give misleading results. While most P and K are recycled by the animal, they usually distribute it unevenly across a field via their feces and urine. Livestock keepers may therefore need to adopt a soil testing approach similar to that of farmers (i.e. more detailed testing than at field level) to get a true picture of lime, P and K needed in a field.

Manure and dung (FYM) are particularly valuable sources of P and K. Careful use of organic fertilizers through well-planned application and the use of new technologies like “dragging shoe application” is essential .

Project participants found that on most farms, ‘pasture only’ soil received a single annual application in the spring (usually 30-40 kg N/ha). For fields used for silage (and pasture), an annual application of 120-150 kg N/ha was more typical (multiply by 0.8 for units/acre).

In this project, the average of the 20 poorest producing fields had slightly higher soil carbon levels than the best at 11.4% versus 10.31%. With few cultivated fields, especially the worst ones, organic matter levels often reflect the inherent nature and drainage of the soils with one particularly wet and difficult field registering a project high of 25.9%.

This is carbon sequestered in the soil, at the center of many current climate debates. This comes from a small proportion of organic matter binding to soil particles and associated aggregates to help form the crumbly texture of the topsoil. Measuring soil carbon according to the standard recognized by the Intergovernmental Panel on Climate Change (IPCC) is technically demanding and therefore expensive. So, although this project tested the fields with the recognized test, the limited number of cores taken means that the results can only be indicative of soil carbon levels.

Yet the results were broadly consistent with the poorer fields registering slightly higher amounts of carbon sequestered at 122 t/ha than the good fields which had 112 t/ha. There are no recognized benchmarks for low, moderate and high soil carbon levels for Scottish grassland soils. Sandy soils, for example, will naturally hold much less carbon than clay soils. However, to give participating farmers an idea of ​​the scale, the following ranges have been noted on the scorecard – low 120t/ha high.

The tentative conclusion is that the soil carbon levels of many tested fields are at or near equilibrium. In other words, the ability to sequester and store more carbon may be limited. However, the project concluded that more detailed research is needed to test and confirm this important finding.

Agricultural consultant Kev Beven who led the project said: “Based on the scorecard tested in this project, the soil health of a representative group of herders was generally good. However, the project also found many opportunities to improve both the farm’s profitability and its environmental footprint by paying greater attention to soil management. »