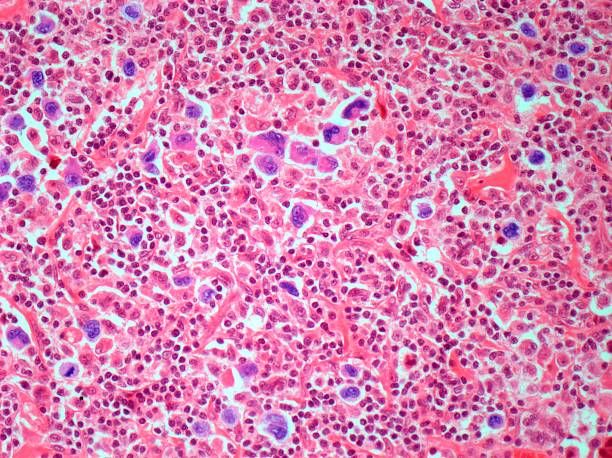 Researchers in a retrospective study of patients with diffuse large B-cell lymphoma (DLBCL) sought to understand the correlation between muscle loss and immunochemotherapy.

In a retrospective study of patients (N = 104) with newly diagnosed diffuse large B-cell lymphoma (DLBCL) with unfavorable disease characteristics who were treated with a standard combination of immunochemotherapy, approximately half underwent muscle loss. However, the study authors said the observed muscle loss was “only detrimental if it was very severe.”

In the study, researchers sought to understand how treatments for curable lymphoma affect the musculoskeletal system. They based their observations on measurable changes in the psoas, which is a flexor muscle extending from the lower back to the femur. “The factors that affect muscle loss are primarily related to the immunochemotherapy and not to the characteristics of the disease before the treatment per se,” they concluded.

The standard of care for DLBCL is rituximab, cyclophosphamide, doxorubicin, vincristine, and prednisone (R-CHOP) combination therapy, and with that, DLBCL is “curable in the majority of newly diagnosed patients,” the authors wrote. However, they said, “a substantial proportion” of patients with DLBCL who have aggressive disease or disease features with poor prognosis “could benefit from more intensive treatment approaches.”

Previous studies have reported improved results with the R-DA-EPOCH regimen in these patients.

The authors noted that sarcopenia (muscle loss) or cancer-induced cachexia (weight loss, muscle wasting) at baseline was associated with poorer outcomes in patients with various cancers, including non-Hodgkin lymphoma. ; and skeletal muscle loss during chemotherapy has been associated with a negative prognosis in gastrointestinal cancers.

To the authors’ knowledge, their study is the first to assess the dynamics of muscle mass during immunochemotherapy and prognostic associations in patients with lymphoid malignancies.

Researchers evaluated the effect of R-DA-EPOCH immunochemotherapy on skeletal muscle mass by measuring the psoas muscle area (PMA) in patients who had baseline and end-of-treatment CT scans.

The study included patients with unfavorable prognostic characteristics who were treated with R-DA-EPOCH between 2005 and 2019. Unfavorable prognostic characteristics were defined as “a very high proliferation index Ki-67 + ≥ 80% and / or an international prognostic index (IPI) 2 points. Ki-67 is a marker strongly associated with tumor cell proliferation and IPI helps predict outcomes in cancer patients.

The authors reported that more than half (57.7%) of the patients experienced muscle loss, and the average loss was 5%. The median psoas area measurement was 1238 mm2 at baseline and 1099 mm2 at the end of treatment, “with a slight but significant decrease during the period of immunochemotherapy”.

In their multivariate model, the researchers identified the following as contributing to the loss of psoas muscle mass: higher body surface area (odds ratio [OR] 17.98 for each 1 m2), the number of cycles with required dose reduction (OR, 2.86, for each additional cycle) and poorer response to treatment (OR, 3.09, for each category increment. reply).

They hypothesized that because R-DA-EPOCH is dosed based on body surface area, the association between body surface area and muscle loss could be “a consequence of higher absolute drug doses”. In addition, the number of cycles with reduced dose required could indicate “poor tolerance to immunochemotherapy” or “lower hematopoietic reserve” (the body’s ability to produce blood cells), both of which could be important predictors. loss / improvement of the psoas muscle, they said.

Median overall survival (OS) and progression-free survival (PFS) were not achieved during the median study follow-up of 46 months. Investigators found that a loss of PMA of 21% or more, which occurred in 24% of patients, was associated with significantly worse OS and PFS.

These associations represented a significant increase, approximately 3 times greater in the risk of death or progression after adjusting for age, sex, IPI score and response to treatment. Lack of response to treatment (progressive or stable disease vs. partial or complete remission) was also associated with lower OS and PFS.

In addition, the authors reported that baseline MAP parameters characteristic of more aggressive tumor behavior, body mass index, age, and gender did not predict loss of muscle mass during surgery. immunochemotherapy, based on the results of the study.

They concluded that “loss of muscle mass occurs in approximately half of patients treated with R-DA-EPOCH [patients with] Newly diagnosed DLBCL with unfavorable features of the disease, and if pronounced this is associated with poorer clinical outcomes regardless of response to treatment. Because they found “profound negative prognostic implications” with pronounced muscle loss, “a question arises as to whether active strategies aimed at improving muscle mass such as physiotherapy and intensive nutritional support might improve outcomes in this. subgroup of patients “.

Dr. Monk on the emergence of NaPi2b as a target in ovarian cancer

How PINK1, linked to familial Parkinson’s disease, activates in detail for the…