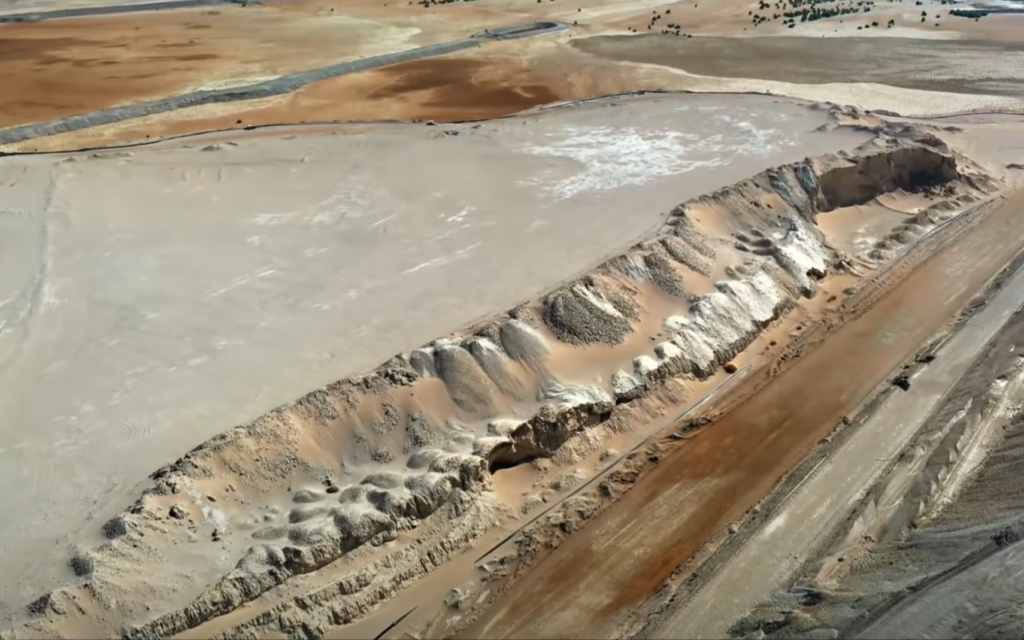 Ponds of toxic sludge are at risk of collapsing and polluting southern Israel’s nature reserves, experts and residents have warned.

ICL Group’s storage pools for the nearby Zin Phosphate Extraction Plant in the Arava Valley were recently reviewed by the company, the results of which were scrutinized by citizens neighboring towns and experts, public broadcaster Kan reported on Tuesday.

The pools have a number of issues that could lead to collapse at any time, they warned. The walls are steeper than allowed and were built using unregulated by-products from the plant, according to the report.

The annual probability of failure is 50%, residents said, based on the recent review of the site.

“When I read the report, I couldn’t sleep at night,” Dorit Evyatar from the nearby town of Hazeva told the network. She warned that those walking in the nearby creek did not know that at any time they could be washed away by a “very, very dangerous flood of water.”

By registering, you accept the conditions

In June 2017, environmental damage was caused when the wall of a storage pool partially collapsed, sending 100,000 cubic meters of acidic phosphogypsum liquid into the nearby Ashalim Creek, a dry river bed leading from the industrial area of ​​Rotem, via a nature reserve, to the Dead Sea.

The toxic sewage destroyed everything in its path as it made its way through the desert, poisoning a third of the local ibex as well as other animals and plants.

In a recent study by the Weizmann Institute of Sciences and the Israel Water Authority, taken up by the daily Haaretz, the water is contaminated with metals that can cause cancer, even on contact.

Hebrew University geologist Amotz Agnon has warned that the walls could collapse if a strong earthquake hits the area. Minor earthquakes frequently shake the Negev Desert. In April 2020, an earthquake of magnitude 4.1 on the Richter scale was recorded.

The Zin phosphate mining plant was recently closed by ICL, but risk deposits remain. The network said it was not clear who was overseeing the site, if any.

The company in response claimed that the walls were structurally sound and had been built to standards. But the Environmental Protection Ministry said it would issue updated instructions for the plant in the coming days, which would include a requirement to repair the pools, to ensure its stability, the report said. .

The climate crisis and responsible journalism

As an environmental reporter for The Times of Israel, I try to convey the facts and science behind climate change and environmental degradation, explain – and criticize – official policies affecting our future, and describe the Israeli technologies that can be part of the solution.

I am passionate about the natural world and disheartened by the dismal lack of awareness of environmental issues of most of the public and politicians in Israel.

I am proud to do my part to keep The Times of Israel readers properly informed on this vital topic – which can and must lead to policy change.

Your support, by joining The Times of Israel community, allows us to continue our important work. Would you like to join our community today?

Join the Times of Israel community Join our community Already a member? Log in to no longer see this

Are you serious. We appreciate this!

We are really glad you read X Times of Israel Articles in the past month.

That’s why we come to work every day – to provide discerning readers like you with must-see coverage of Israel and the Jewish world.

So now we have a request. Unlike other media, we have not set up a paywall. But since the journalism we do is expensive, we invite readers for whom The Times of Israel has become important to help support our work by joining The Times of Israel community.

For as little as $ 6 per month, you can help support our quality journalism while benefiting from The Times of Israel WITHOUT ADVERTISING, as well as access to exclusive content reserved for members of the Times of Israel community.