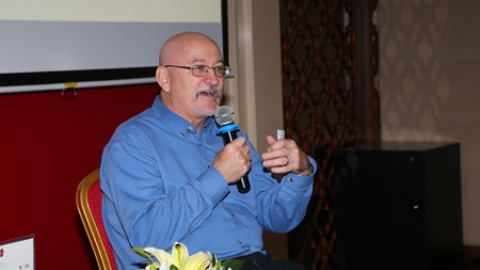 On February 23, 1979, Frank Hawke, 25, arrived at the snow-covered Beijing Capital Airport with seven other American students.

They were the first group of American students to study in the People’s Republic of China since the two countries officially normalized diplomatic relations on January 1, 1979.

Hawke, who has lived and worked more or less continuously in Beijing for the past 40 years, is now the Director of the Chinese Program at the Stanford Graduate School of Business, located at the Stanford Center at Peking University.

Study and teach at Peking University

Hawke’s interest in China was sparked by two Stanford sinologists – John Lewis and Harry Harding, when undergraduate economics took some of their courses on contemporary Chinese politics. After obtaining his bachelor’s degree, he decided to pursue an academic career in Chinese studies and began to learn Chinese.

“When I first came to China, I actually spoke very little Chinese. I might be able to recognize some characters, but that was about it,” said Hawke, who now speaks Mandarin very fluently with an accent. from Beijing.

After a short stay at the Beijing Language Institute upon his arrival, Hawke was admitted to the Department of World Economics at Peking University.

“Classical economist, Professor Hong Junyan became my mentor. He was a wonderful man. He treated us very kindly and was very aware that we were far from home,” said Hawke.

Hawke was supposed to return to Stanford after a year at Peking University, but he didn’t. “I wasn’t ready to go back yet because I felt there was still a lot to learn,” he said.

Hawke then taught neoclassical economics at Peking University for a semester at Hong’s invitation.

Negotiations for the first automotive joint venture in China

After teaching at Peking University, Hawke joined a company called Unison International, which has helped American companies do business in China.

With Unison, one of the most famous deals in which Hawke participated was the Beijing Jeep Corporation, the first Sino-foreign automotive joint venture between American Motors Corporation, one of Unison’s customers, and Beijing Auto Works.

“It was a very interesting negotiation,” he said, adding that “every detail had to be negotiated. Finally, we did it in 1983.”

When China opened its doors to the world market in 1978, the automobile was still a novelty to the Chinese, but today China is becoming the leading player in both the manufacture and sale of automobiles, the cars being almost a necessity for households.

In 1997, IMC Global, one of the world’s leading producers of phosphate and potassium fertilizers, hired Hawke to serve as president of its Asian subsidiary.

This job gave him many opportunities to travel around China and speak not only to Chinese phosphate producers, but also to a large number of Chinese farmers.

“It was really great fun for me to be able to talk to Chinese farmers and learn more about their lives and how we could help them improve their crop yields, not just by providing them with these very important fertilizers. , but also discussing how to cultivate. more scientifically, ”Hawke said.

“We were providing something that China badly needed, that Chinese farmers badly needed, as the Chinese say, Feiliao Shi Liangshi De Liangshi (fertilizer is the food of the grain),” he said.

In 2011, Hawke was offered his second job in agriculture – to lead operations in East Asia for the International Potato Center, headquartered in Lima, Peru.

What impressed Hawke the most was that “the Chinese farmers were extremely friendly, always ready to answer our questions, always ready to learn.” “It gives you a sense of accomplishment to work with people who really want to listen and maybe learn something.”

Beginning in 1979, Hawke saw China grow at a very rapid rate, which is, as the World Bank has described it, “the fastest sustained expansion in the history of a major economy.”

There were “rationed coupons for everything” because the Chinese government had to make sure everyone had basic necessities, he said. The nation at the time could not produce enough grain and various kinds of food for its people like meat, eggs, etc.

“When the ration coupons left, I think it was a sign that things had turned. So that was a big step, obviously,” he said.

Over the past 40+ years, more than 700 million people in China have been lifted out of poverty, contributing more than 70% of global poverty reduction.

Speaking of the strained relations between the United States and China, Hawke said the two countries “should be in a better position to understand the other side” after 40 years of establishing diplomatic ties.

The world’s two largest economies may “always disagree, but we can disagree with respect for mutual understanding,” he said, noting that both sides should learn the history and culture of the world. other.

“One way to avoid mistakes, to avoid tragedies, is to have very strong interpersonal relationships. I would like to see more exchange students, more people coming and going in all fields, it is extremely important, “he said.

“It’s good to have had a past worth telling,” Hawke said of his China stories in retrospect.

A genetic change for a long and healthy life? – ScienceDaily