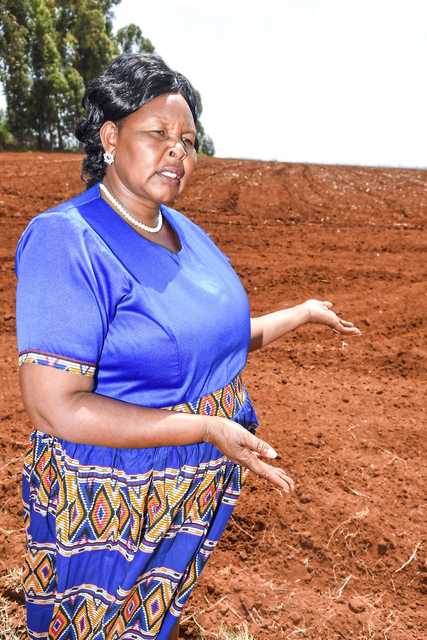 Wheat, maize, tea and flower growers who have been restricted to buying just 10 bags of subsidized fertilizer per farmer say they have reduced the acreage of some crops, abandoned fertilizer-starved crops, which means that in the next harvest season, staple food volumes will be very low.

Dr Timothy Njagi, a senior fellow at Egerton University’s Tegemeo Institute of Agricultural Policy, said the high cost and scarcity of agricultural inputs, attributed to global uncertainties such as the ongoing conflict between Ukraine and Russia, will lead to lower production. .

“Due to rising costs of farm inputs such as fuel and fertilizer, a farmer who was cultivating 200 acres is likely to reduce his acreage to 100 acres. This reduction is expected to lead to lower harvests and higher food prices,” he says.

Prisca Keter, a wheat farmer in Kabobo in Soy, Uasin Gishu county, is one of many who have reduced the area devoted to cultivation. On her farm, she has plowed acres and acres of land but has yet to plant.

“My farm is ready to plant wheat but I have no fertilizer. I had asked for the contribution from the National Cereals and Produce Board {NCPB} at 2,800 shillings, and I am waiting for it because traders are selling at 6,000 shillings,” she says.

Last year she planted wheat on 40 acres of land but this year, like many farmers in the area, she has reduced the area to 15 acres.

She was also forced to use one bag of fertilizer instead of two bags, which she says will lead to lower crop productivity.

From the local cooperative, she will receive five bags of planting fertilizer and top dressing each, which is barely enough for her farm. There were also problems with distribution and access to fertilizer, which delayed the timing of application. Top dressing fertilizer works best when timing is critical.

Normally Mrs. Keter harvests 30 bags but she expects a drop to 10 to 15 bags per acre.

“In addition to struggling to get fertilizer, the cost of agrochemicals, fuel, seeds and other inputs has also increased. If the government rationalizes the distribution of fertilizers and also sets the minimum prices for agricultural products, we will be sure that we can recoup our investment,” says the farmer.

David Chombet, a farmer in Ziwa in Uasin Gishu, stands in front of a section of his farm now grown in coffee.

The farmer says he reduced the area under maize from 10 acres to four acres and planted passion fruit, tomatoes and coffee on the remaining land. These crops, he says, require less fertilizer.

Years ago, coffee farming was rare in Uasin Gishu, but years of high cost of maize production due to soaring fertilizer prices pushed Mr. Chombet towards coffee farming which, he says, it, can thrive with organic manure.

On his farm, he prepares manure from his cows and buys more of it from other ranchers to use on his coffee, instead of relying on the erratic and expensive inorganic fertilizer.

“The cost of fertilizers and other inputs has made farming unsustainable this year. I needed two bags of inorganic fertilizer but I can’t afford it, so I opted to use five kilos of compost manure,” says the farmer whose tomato crop is in a greenhouse and passion fruit under drip irrigation.

In June, farmers usually need Calcium Ammonium Nitrate (CAN) fertilizer for their crops. Currently, a bag of CAN costs Sh5,000 per 50 kg bag, while Diammonium Phosphate (DAP) costs Sh6,000 in the retail market.

Micah Cheserem, the former chairman of the Income Distribution Commission who grows flowers and avocados in Uasin Gishu, adds that the flower industry has also not been spared from expensive fertilizers. Flower production costs jumped 50%.

“High fertilizer and fuel prices have forced us to ship some of our produce by sea due to high transportation costs,” says Cheserem.

The former Governor of the Central Bank of Kenya notes that for avocados he applies compost manure rather than synthetic fertilizers, to meet export market needs.

“Some farmers have planted without fertilizer while others have used manure which is a slow release fertilizer {a kind of input that does not help plants to thrive quickly}. I want to urge farmers to use leaf feeds to boost their crops,” Dr. Nzomo said.

The Ministry of Agriculture has set aside 5.7 billion shillings to subsidize more than 2.2 million 50kg bags for farmers who grow food crops. These quantities are intended to support the cultivation of 1.13 million acres.

Supply problems were blamed on an ammonia shortage; a key element in the fertilizer manufacturing process, since countries such as Turkey and Ukraine, where the raw material comes from, do not export.

Tighter supplies from larger producers like China which announced the suspension of exports to protect its domestic market is also to blame. China, the world’s top phosphate exporter, said it would temporarily suspend exports until June 2022.

According to the latest World Bank Fertilizer Price Index report, high energy costs coupled with soaring natural gas and coal prices have driven up the cost of fertilizers.

Global environmental regulations have also contributed to higher prices for raw materials such as sulfur and ammonia used to make fertilizers. “Prices will remain volatile due to global market forces that may force some farmers to plant without the nutrients,” said Henry Ogola, an expert in importing agricultural inputs.

The NCPB, designated to distribute agricultural inputs, admitted logistical challenges due to severe shortages in the global market.

“We are facing an insufficient supply of top dressing fertilizer, but we have partnered with suppliers to provide an alternative to farmers,” said Joseph Kimote, NCPB’s chief executive.

Government subsidized CAN top dressing sells for 1,950 shillings but is missing from NCPB stores, forcing farmers to dig deep into their pockets to buy the inputs at 7,200 shillings at retail markets.

But they have so far distributed over 100,000 bags of planting fertilizer and top dressing. The country needs about 650,000 tons of fertilizer per year.

Experts claim that NPK fertilizer is also superior, so the shortage of DAP should not delay planting.

“There are other fertilizers like NPK 23; 23 which is suitable for planting crops in the region unlike the DAP variety,” Mr. Kimote said. The agency has partnered with Toyota Tshusho, Mavuno, Yara, Mijingo among other suppliers to speed up the distribution of fertilizer to farmers.

Mr Kimote added that they have increased the allocation to farmers who have met the stipulated requirements from 20 to 40 bags.

“Farmers with certified documents are now allowed to buy 40 bags instead of the initial 20, both for planting and top dressing,” he said.

The scarcity of low-cost fertilizers has not spared small tea producers who are facing heavy losses.

Some tea growers say they buy finishing fertilizer from retailers at 6,800 shillings per 50 kilogram bag in the retail market. This is expected to eat into their profit margins.

The Kenya Tea Development Agency (KTDA) offers fertilizer to its members at about 1,990 shillings per 50-kilogram bag and delivers the produce to buying centers, reducing transport costs, but the program has been hit hard by the supply instability.

“The fall in world tea prices is a blow given that we have to bear additional costs to buy fertilizers at retail prices. The cash crop has also been damaged by frost and hailstones in the past two seasons and it could take a long time before prices recover, subjecting us to heavy losses,” said Mathew Too, a grower from tea in Chepkumia, Nandi County.